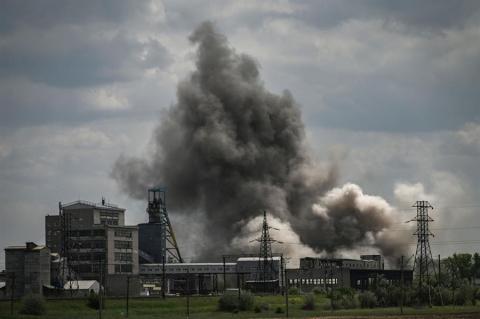 Russian troops are advancing in eastern Ukraine, pounding key cities and aiming "to destroy everything there", President Volodymyr Zelensky has said, as Moscow signaled it was digging in for a long war against its neighbor.

As the war entered its fourth month on Wednesday, Russian forces were relentlessly bombarding the industrial city of Severodonetsk while attempting its encirclement, a key goal of recent fighting in the Donbas region.

Zelensky mourned the thousands of Ukrainian men and women who have perished since the start of the Russian invasion while renewing calls for heavy weapons from foreign partners, saying arms for Kyiv were "the best investment in stability in the world."

Sergiy Gaidai, governor of the eastern region of Lugansk, said Severodonetsk was being hammered by air strikes, rockets, artillery and mortars in a bid to solidify control over the province and move further into Ukraine.
"The situation is very difficult and unfortunately it is only getting worse," Gaidai said, describing what he termed a "full-scale offensive in all directions" in a video on Telegram.

"The Russian army has decided to completely destroy Severodonetsk. They are simply erasing Severodonetsk from the face of the earth," he said.
Thousands of troops were sent to capture Lugansk region, Gaidai said, adding that the bombardment of Severodonetsk was so intense it was too late for its 15,000 civilians to leave.
In Moscow, Russian Defence Minister Sergei Shoigu made it clear Russia was settling in for a long war.
"We will continue the special military operation until all the objectives have been achieved," he said, using Moscow's name for the war.

In his daily address to the nation late Tuesday, Zelensky called the...