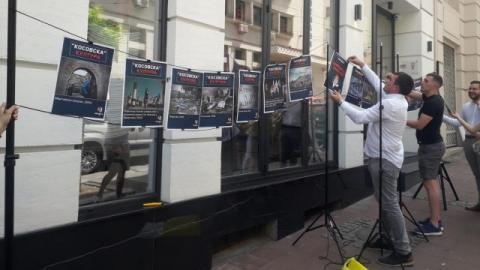 The Mirëdita, Dobar Dan festival, which means "good day" in Albanian and Serbian and promotes reconciliation between Serbs and Kosovo Albanians, opened Wednesday in Belgrade with a photo exhibition, "All our tears", which pays homage to victims of war in Yugoslavia, particularly ethnic Serbs, Albanians and Macedonians.

"The festival starts with this because war victims are a stumbling stone in our relations. In order to understand each other better, we need to know what happened. This exhibition intends to give space to the voice of victims because it is a zero point of every dialogue," Sofija Todorovic, the programme director of the Youth Initiative for Human Rights, one of the organizers, said.

She emphasized that the exhibition was created in cooperation with associations of families of missing and killed people from Serbia and Kosovo, as well as families of killed civilians and internally displaced persons from North Macedonia.

The stories represent several aspects of the wars in the former Yugoslavia - family photos of missing persons, crime scenes, mass graves, internally displaced persons and memorials, but also the long-lasting consequences of the conflict that are still felt today, showing the tragedy and complexity of the war.

Since it was founded in 2014, Serbian right-wing organizations have tried to disrupt the festival, which is organised by the Youth Initiative for Human Rights, the Civic Initiative from Belgrade and the Integra NGO from Pristina in Kosovo.

The nationalist NADA coalition, which won 5.4 votes in April's Serbian parliamentary elections, on Tuesday called for a ban, accusing it of harming the interests of Serbia and of promoting the secession of Kosovo, Serbia's former province.