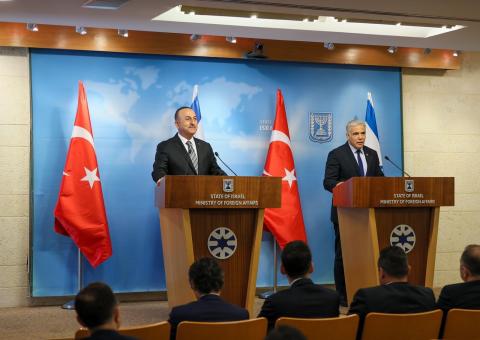 Turkey and Israel have decided to continue their bid to normalize their relationship through dialogue and technical contacts, particularly in the areas of economy and trade, the two countries' foreign ministers have said, adding a new framework is agreed to be established for the future of the bilateral ties.

Foreign Minister Mevlüt Çavuşoğlu has become the first Turkish top diplomat to pay a visit to Israel in the past 15 years as Turkey and Israel are in efforts to mend the broken ties over the past decade. Çavuşoğlu and Israeli Foreign Minister Yair Lapid organized a joint press conference following their talks in Jerusalem on May 25.

"We have conducted fruitful, candid and purposeful talks and agreed on a new framework for our ties," Lapid said at the press conference, also announcing that the two sides decided to resume the work of a joint economic commission and hold talks for a new civilian aviation agreement.

Turkey and Israel are two important countries in the region, and they are able to mend ties despite differences on a number of issues, the Israeli foreign minister stressed. Noting the process ahead will be continued through sustainable dialogue and technical talks, person-to-person and business-to-business.

"So, in this visit that comes after 15 years, we are expecting improvements not only in diplomacy and security but also economic and civilian ties," he said.

Lapid recalled that Turkey had been the first Muslim nation to recognize the State of Israel in 1949 and that Israelis love Turkey very much, highlighting that bilateral trade and other economic activities have not been negatively affected by the poor bilateral political ties or the COVID-19 pandemic.

"We are committed to further improving them," he...