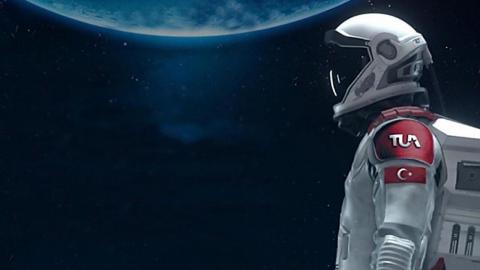 "We are officially starting the process of sending a Turkish citizen to space, within the scope of our National Space Program," Erdoğan said during a speech after the cabinet meeting.

"On the 100th anniversary of the Republic of Turkey 2023, there will be a Turk in space," the statement read.

With this opportunity, the country will have the chance to conduct scientific experiments by using the infrastructure of the International Space Station (ISS). The selected citizens will undergo training before leaving for space.

Authorities have set 10 targets within the scope of the program. According to the Moon Mission, at the end of 2023, Turkey will reach the moon with the national and original hybrid rocket, which will be fired into near-earth orbit and make a hard landing.

Turkey began to receive submissions from citizens to serve aboard the ISS.

Two candidates will be chosen from the applicants. One of them will stay in the ISS for 10 days.

A candidate must be a Turkish citizen, born after May 23, 1977, not have been prohibited from public rights, completed one of the following faculties of Engineering, Science/Basic Sciences, or Medicine in the field of science with at least four years of undergraduate study at higher education institutions and have complete proficiency in English.

They will also need to undergo a medical examination and pass the height and weight requirements.

Candidates will apply through the government's relevant website uzaya.gov.tr....