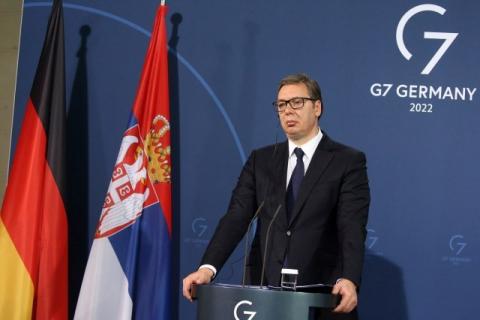 Speaking to the media about the Open Balkans initiative, Vui said that more people were involved.
"We are satisfied with what we have. Relations between Albania, Serbia and North Macedonia have never been better," Vucic said.
"People think we have to chase someone to justify our existence. We don't have to. We invited them all. We are happy with what we have, we would like to have more, but we are happy. We have good cooperation with everyone," the president said.
"Who wants cooperation is welcome and that's it," said President Vui.
"You have a big drop in the popularity of the EU not only in Serbia, but also in North Macedonia. You have a seesaw, one should ask how the people would vote today. There must be some faults of certain member states, not only ours. Serbia is on the European path, it is the only policy that Serbia has, but instead of what you have done for us, we do not want to listen to the need to impose sanctions, Serbs and citizens of Serbia remember what happened more than 20 years ago. You can't pretend that everything is the same. You have to try to understand, to hear .We know it's the past, but at least listen to us, hear our suffering. Don't repeat to us every day what you want from us. We have our own people," Vucic said.
He said that he had listened to the humiliating comments of various people about the Croat media head hunt.
"I have listened to the humiliations of various who boast of being right-wing, talking about some bullets, I would like them to show me where and when it happened. It shows how many people in Europe think they are entitled, due to our European path to determine what we can and what we can't say.
"I am able to talk about the sacrifices made by Serbs to others, and they are not...