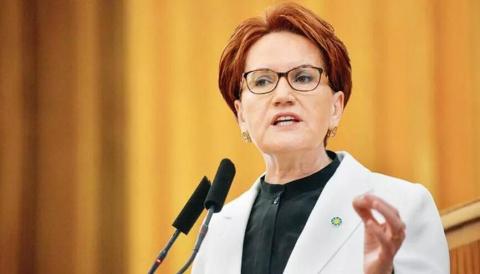 İYİ (Good) Party will lend support to the government's policy regarding Finland and Sweden's membership in NATO if this policy aims to eliminate the illegal PKK group in Europe, party leader Meral Akşener said on May 25.

"If you aim to eliminate the PKK from Europe, the path is clear. We will stand by you. But if you aim to raise the tension, it is our duty to stop you there." Akşener said, speaking to her party members at the parliament.

The goodwill of Turkey towards the Western countries has been "abused many times," she said. Those who expect goodwill from Turkey for the membership of Sweden and Finland in NATO should first question their own intentions, the politician said.

"As the İYİ Party, we think this decision should be taken by considering our national interests," she said and expressed two targets for this policy. Firstly, the policy must aim "to end the PKK presence in Europe, to collapse the terrorist organization's European structure," she said.

Akşener also stressed Turkey's decision should help "strengthen European security against the aggressive Russia of Putin, who dreams of tsarism," adding that these were not conflicting goals.

If Sweden and Finland want to become members of NATO to "protect themselves, they must react to the PKK, which uses them, and remove the terrorist organization from their lands," Akşener said.

Countries such as Germany, England and France should also do this, Akşener added.

"We see the PKK's pro-Putin stance as an opportunity to establish common ground between Turkey and other NATO countries. This will contribute to expelling the PKK from Europe and strengthen European security," she said.

Turkey can achieve this through effective diplomacy, Akşener said, stressing...