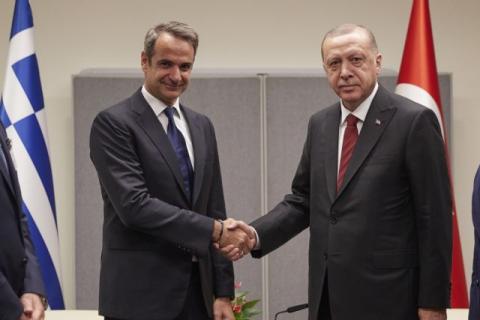 The new Turkish claims of "conditional sovereignty" - where the condition for their concession was, always in Ankara, their demilitarization - exercised by Greece in the Aegean islands as well as in the Dodecanese, are "a new development" and "they are seriously undermining regional peace and stability," Athens said in a letter to the United Nations on May 25, responding to a letter from Turkish Permanent Representative Feridun Sinirlioglu on September 30, 2021.

The Greek government emphasizes in its letter to UN Secretary-General Antonio Guterres that Turkish claims that "Greek sovereignty over the [Eastern Aegean] islands is dependent on their demilitarization" under the Lausanne (1923) and Paris Treaties (1947) are "legally, historically and factually unsupported". It is noted in this connection that Ankara insists that as sovereignty is called into question, the rights deriving from its exercise are also questioned - in this case the rights of islands to maritime zones.

Athens cites two legal cases before the International Court of Justice in The Hague (ICJ) to clarify that borders and territorial sovereignty formed by international treaties cannot be challenged. The two cases are a) that between Cambodia and Thailand for the Preah Vihear temple (Case Concerning the Temple of Preah Vihear, Cambodia v. Thailand, Judgment of 15 June 1962) and b) that between Libya and Chad (Territorial Dispute, Libyan Arab Jamahiriya / Chad, Judgment of 3 February 1994).

According to the first hypothesis, "when two countries define a border between themselves", the primary purpose of the conditions defining borders and territorial sovereignty is "to achieve stability and finality", as stated on page 34 of the decision. In addition, this is the...

Shooting in a kindergarten, at least 31 victims: Children among the dead VIDEO/PHOTOS
The Longest Reigning Monarchs in History (infographic)

Libya: How the Erdogan-Dbeiba deal collapsed