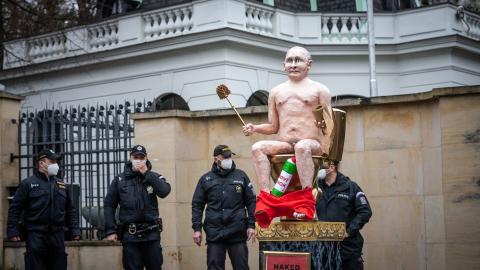 During other actions, the Olympic rings transformed into nooses are wheeled to the front door of the Czech parliament to mark the beginning of the Chinese winter games in February. Outside the German embassy, a piece of pipe is noisily destroyed to protest Berlin's cooperation with Russia's Nord Stream 2 gas project.

The ultimate aim, says van Gemund - speaking just ahead of Russia's invasion of Ukraine in February - is to defend against dictatorships that are "trying to destroy Western democracy".

"If we don't react, they will destroy us," he states. "It's an existential issue."

The papier-mâché figure of Chinese President Xi Jinping wheeled through the streets of Prague on the way to the next protest. Photo: Kaputin Prophets of doom

Russia's annexation of Crimea in 2014 was the kick that launched Kaputin. The group now boasts a core of around 20 activists, but can call on up to 120 depending on its needs.

"I was horrified by the lack of reaction," the 53-year-old half-Czech, half-Dutch van Gemund says of the Russian land grab. "The West just didn't realise the danger."

Better late than never, the full-scale onslaught on Ukraine so raised the alarm that the activist group has been able to take a "holiday" for a few weeks.

"There was no reason for us to protest Putin's aggression this time," van Gemund shrugs as he hoovers up coffee and cola during a lunch break...