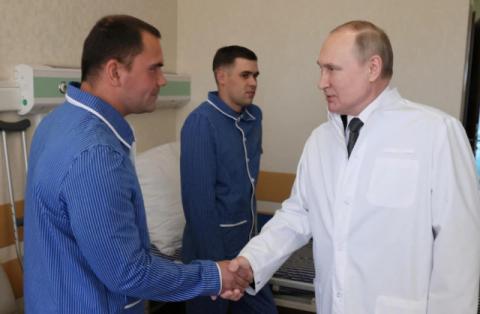 Russia has raised the age for recruiting new soldiers, Kuleba has criticized NATO, Putin has met with wounded soldiers. Here are the highlights of events related to the war in Ukraine over the past 24 hours:

Russia attacked 40 cities in Donbas in the span of hours

A total of 40 cities have been attacked by Russian forces in the Donetsk and Luhansk regions, the Ukrainian army said.

Official information coming from Russia's adversary is a sign that Moscow is stepping up its offensive in eastern Ukraine two months after announcing that it was Donbas that is the focus of hostilities during the so-called "special operation".

In an updated Facebook post, the armed forces explained that the occupiers fired on more than 40 cities and damaged or destroyed 47 civilian sites, 38 of which were homes and one a school.

On Sunday, Luhansk Oblast Governor Serhiy Haidai accused Russia of using "scorched earth tactics" in an effort to seize Sievierodonetsk, a city of about 100,000 people (pre-war).

The fall of Sievierodonetsk and the nearby city of Lysychansk would leave the entire Luhansk region under the control of Russia and the separatists. Confirmation that Russia is advancing in Donbas and that its army is "significantly superior" to Ukraine's in some parts of the east also came from Ukrainian President Volodymyr Zelensky. This week, he warned that Russia was destroying Donbas and called for more weapons.

According to NV.ua, Russian forces also fired on the center of Lysychansk while intensifying the...