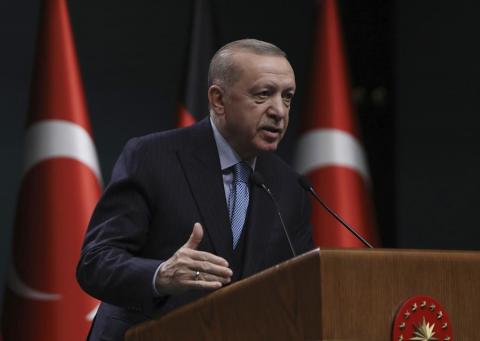 President Recep Tayyip Erdoğan has accused the main opposition Republican People's Party (CHP) leader of threatening public servants and has vowed that his government will not allow any insult or defamation against bureaucrats for political purposes.

"Let me be clear: Those who say a word against the public servants beyond the boundaries of democracy and the rule of law is an enemy of the state and the people," Erdoğan said at the Signing Ceremony of Cooperation Protocol on Ethics Education and Training of Ethics Instructors in Ankara on May 26.

CHP leader Kemal Kılıçdaroğlu had blamed some bureaucrats for helping Erdoğan and his family to funnel large amounts of money to the United States through two educational foundations. Erdoğan and ruling Justice and Development Party (AKP) officials, as well as the concerned foundations, denied Kılıçdaroğlu's accusations.

"The reason for this disgustingness is to render the state inoperable and deprive the people of public services. Obviously, we cannot allow such viciousness," Erdoğan stated. The guidelines of the Turkish bureaucrats are the constitution and Turkish laws, he added.

"Our public servants should be reassured. We will always stand with them. We have not a single minute to lose with these kinds of dark operations," the president stated, underlining that defending the bureaucrats is his job as the head of the nation.