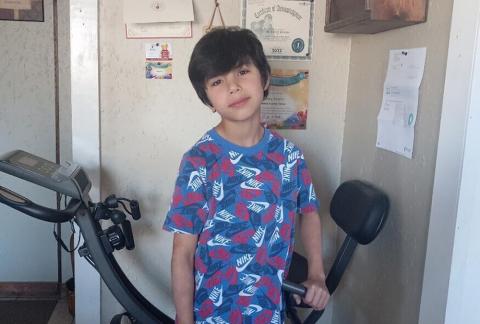 Ryan Ramirez fought back tears at a Wednesday vigil as he spoke of his "lovable" 10-year-old daughter Alithia, an aspiring artist who was among the 19 schoolchildren killed in a cold-blooded shooting that has devastated a tight-knit community.

As mourners embraced and wept, relatives and friends of those murdered in the latest US school massacre gathered on the bleachers and on the dirt of a fairground arena in the small town of Uvalde.

Some in the crowd of about 1,000 held portraits of the dead, others squeezed stuffed animals and drawings, each struggling to comprehend the unspeakable horror of the previous day.

"She was a real good artist" and aspired to greatness, Ramirez said, flipping through a portfolio of Alithia's colorful paintings as well as birthday cards she drew for her mother.

"My daughter would want everybody that was involved to be strong, and keep it together. That's what we're trying to do."

A grieving Esmeralda Bravo held a photograph of her granddaughter Nevaeh, one of those who died.

"This has no explanation, my granddaughter did not deserve this," Bravo said quietly.

"She was a good little girl, very shy and very pretty," she added. "It means so much to me to have this support from the community, but I would rather have my granddaughter here with me."

In the small house of worship off Uvalde's main...