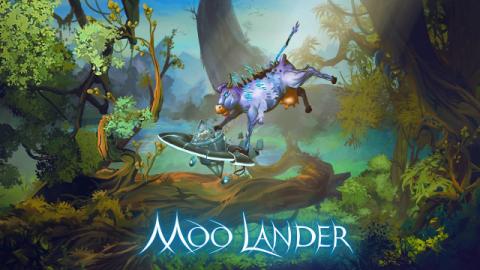 The Bulgarian indie (independent*) game Moo Lander, which has been in development for over 6 years, will be officially released tomorrow, May 27 (Friday). The industry is gaming, and the genre is adventure metroidvania in 2D format. The game is filled with space cows and lots of milk and it will be available simultaneously for PC (via Steam), Xbox and PlayStation. The game's developers work closely with partners from multinational corporations such as Sony and Microsoft.

The talented boys from the Plovdiv game studio The Sixth Hammer have been working for six years on their biggest and most ambitious project - Moo Lander, a game about flying saucers and powerful space cows. The team consists of specialists in various fields - from music arts, tourism and hydro-engineering, to beekeeping. The game has a strong presence on the international gaming scene, with the most Moo Lander fans coming from Mexico, Brazil, India and the United States. Moo Lander participated in prestigious digital gaming festivals such as E3, Gamescom, PAX Online and EuroPlay.

Every fan of e-cows can try part of the game by playing the free demo on the digital platform Steam (there is also a demo on the platforms Xbox and PlayStation). One of the unique aspects is the multiplayer that Moo Lander offers - together with family and friends you can play modules such as PvP, PvE, Survive the Waves and the icing on the cake - football with cows - Galactic Mooball! With the ability to play locally with up to 4 people, Moo Lander offers many hours of fun with friends and family.

In its first week, the game will be 10% off - here you can find links to all platforms.