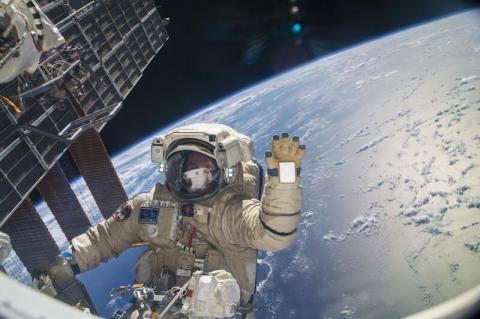 Around 4 million people have visited an official website displaying the criteria to become Turkey's first astronaut, with more than 31,000 people applying in just 48 hours, Industry and Technology Minister Mustafa Varank has said.

President Recep Tayyip Erdoğan announced that the website "uzaya.gov.tr" is open for submissions late on May 23.

The site listing the criteria drew great attention in a short time.

Speaking at an event in the capital Ankara on May 24, Varank announced the number of applications received on the first day.

"Some 2.7 million visited the site, some 27,000 made applications," he said and added that 150 of them fulfilled the criteria.

Varank was in Istanbul on May 25 to address participants of the Istanbul Creation Web Project.

When asked about the latest rates, Varank said, "As of today, some 4 million visited the site and around 31,000 applied."

The number of those fulfilling all the criteria also increased to 225 from 150 in a day.

"I think the numbers will increase more," the minister added.

A candidate must be a Turkish citizen, born after May 23, 1977, not have been prohibited from public rights, completed one of the following faculties of Engineering, Science/Basic Sciences, or Medicine in the field of science with at least four years of undergraduate study at higher education institutions and have complete proficiency in English.

They will also need to undergo a medical examination and pass the height and weight requirements.

Two candidates will be chosen from the applicants. One of them will stay at the International Space Station for 10 days.