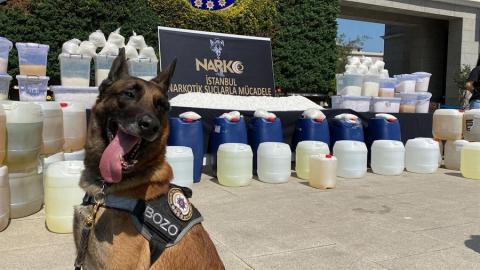 Istanbul police have seized 1.1 tons of methamphetamine, a record amount of a potent central nervous system stimulant used as a recreational drug, during simultaneous anti-drug operations held on May 24.

Doses of 200 mg of methamphetamine are considered "fatal," as the psychological effects can include euphoria, dysphoria, changes in libido, alertness, apprehension, decreased sense of fatigue, insomnia, or wakefulness.

"After a long follow-up, 1 ton and 117 kilos of methamphetamine were seized. Record at one go," the minister added.

According to security officials, the historic anti-drug operation started on May 19, when narcotics police caught some drug dealers in Istanbul.

With the approval of Soylu, the narcotics team extended the inquiry and reached the name of Iranian drug lord R.K., identified by only initials.

Uncovering the baron's drug web in Istanbul, the police detected six addresses in the districts of Bahçelieveler, Bayrampaşa, Esenyurt, Büyükçekmece, Beykoz and Güngören.

Early on May 24, police raided the addresses at the same time and nabbed the Iranian drug lord while he was preparing to leave a villa in Merter neighborhood.

A suspect codenamed "Doctor" who was producing the drugs was detained in a villa in Beykoz with three other suspects.

Police found out that "Doctor" converted a room of the villa into a "plant" where he was producing drugs.

Among the 1.1 tons of methamphetamine, security units also seized some 124 kilos of chemical materials and various cash currencies worth around 1 million Turkish Liras.

The news of the "gang busting" was also given by...