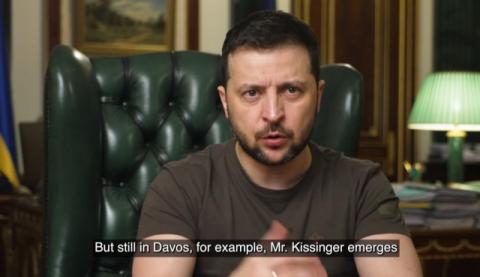 Russian forces have shelled more than 40 cities in Ukraine's eastern Donbas region, the Ukrainian military said, threatening to close the last major escape route for trapped civilians on their four-month invasion. In his traditional evening video address, President Volodymyr Zelensky reiterated that Ukraine will not cede its territory to Russia.

Vladimir Zelensky firmly rejected the possibility of his country giving up part of its territory in the name of a peace agreement with Russia. The Ukrainian president criticized the proposals of some Western politicians for Ukraine to make concessions to Moscow, mentioning former US Secretary of State Henry Kissinger.

"Whatever the Russian state does, there is always someone who says, 'Let us take its interests into account.' This year, it was heard again in Davos. Mr. Kissinger emerged from the deep past and says that it is necessary to give Russia a piece of Ukraine so that Russia is not alienated from Europe."

"The interests of Ukrainians should not be overshadowed by the interests of those who are in a hurry to meet the dictator again," Zelensky said, apparently referring to Russian President Vladimir Putin.

Earlier, Ukrainian Foreign Minister Dmytro Kuleba accused NATO of "doing absolutely nothing" against Russia's invasion of his country but at the same time welcomed the European Union's "revolutionary decisions".

"We see in the face of NATO an alliance, a remote institution that does absolutely nothing," Kuleba told the World Economic Forum in Davos.

The minister added that at the beginning of the war, Ukrainians saw NATO as a "real force" and the EU as an institution that could only "express concern".