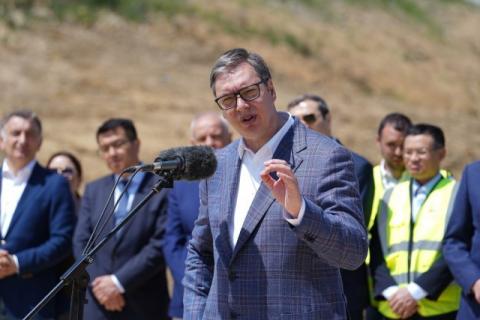 After visiting the construction site, he answered the questions of the journalists. When asked about the claims of the opposition about the introduction of sanctions against Russia, he answered that many on the political scene are engaged in fortune telling.
"Let me joke with you, we have so many prophets Vanga, I knew that there was one and she lived in Bulgaria, but we have so many on the political scene in Serbia who are engaged in fortune telling and talk nonsense," said Vucic.
"For the sake of truth, we are behaving very responsibly. We do not need any oaths. And I am telling those who criticize to be a little less of Grandma Vanga. And I am telling the people that I am running my business responsibly and we will see how far we will go," he said.
"Something else about sanctions, since I see that some said that those who imposed sanctions to the RS in 1994 are in power again, I must say that they are lying. Just stop with untruths and fabrications," Vucic said. Commenting on Srdjan Milivojevic's statement that "thank you for your friendship" statement will soon follow, Vucic said that it would certainly be the case as he would talk to Putin, and that both of them always behave politely and greet and thank one another.
"The person who said that is not familiar with any language," he criticized. "Every story, fabrication, everything falls into the water, every lie, they don't care, they continue with the new one the next day, and the people must live and see who is the one who will take care of them, to act responsibly and seriously," he added.
Vui announced that he would have a conversation with Russian President Vladimir Putin on Sunday at 11 a.m. He said he expected a fair and honest discussion.