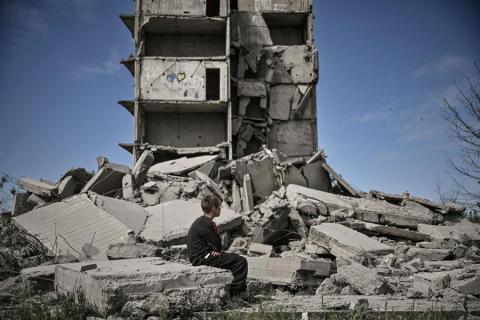 Ukrainian President Volodymyr Zelensky has issued a bitter rebuke to the West for not doing enough to help Kiev win the war, as fierce battles rage in the country's east and Russian troops draw ever closer to encircling a key industrial city.

But the industrial centre has yet to be surrounded, he said in a video posted to Telegram Wednesday.
Predicting the "coming week will be decisive", Gaiday added the city was being subjected to a "colossal amount of shelling" by Russian troops attempting to batter it into submission.
Earlier in the day, Ukrainian Foreign Minister Dmytro Kuleba told attendees at the World Economic Forum in Davos his country "badly" needs multiple-launch rocket systems to match Russian firepower in the battle for Donbas.
Zelensky echoed that plea from Kiev.
"We need the help of our partners -- above all, weapons for Ukraine. Full help, without exceptions, without limits, enough to win," Zelensky said in his daily address to the nation.

Saying the world had been unprepared "for Ukrainian bravery", Zelensky called out the international community Wednesday for paying too much attention to Russia's interests and too little to Ukraine's.
He took specific aim at former US Secretary of State Henry Kissinger and the New York Times for suggesting territorial sacrifices might be necessary to end the conflict.
Kissinger, the 98-year-old...