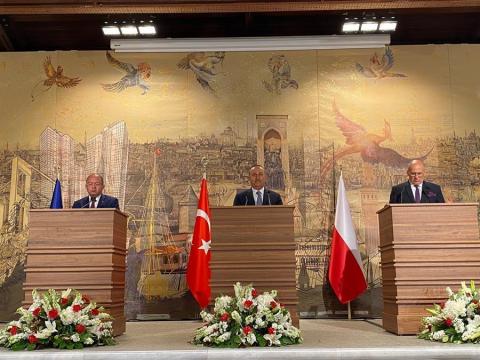 NATO allies should encourage Finland and Sweden to take concrete steps regarding Turkey's concerns about the "support given to terror groups," Foreign Minister Mevlüt Çavuşoğlu said on May 27.

The minister reminded that Turkey's opposition to Finland and Sweden's NATO bid is due to their "support to terrorist organizations."

"Reasons for why Turkey is objecting to the candidacy of these two countries are very clear: The relations of these two countries with terrorist organizations such as PKK/YPG, DHKP-C, FETÖ and their support to those terrorist organizations," Çavuşoğlu said, speaking at the joint press conference after the Trilateral Meeting of Foreign Ministers of Turkey, Romania and Poland.

"These countries need to end supporting terrorism. In addition, the defense industry restrictions against us must end. Such decisions are not taken against friends and allies… I hope Finland and Sweden understood our message very well. Other allied countries should encourage these two countries to take concrete steps regarding Turkey's concerns," Çavuşoğlu noted.

NATO's security and solidarity are important to all and valid for all allies, he said.

"We understand the security concerns of Finland and Sweden, but as many of our allies within NATO openly say, everyone needs to understand Turkey's legitimate security concerns as well. That's why we want the fight against terrorism to be clearly included in the strategic concept," the minister stated.

Recalling the meeting held with the...