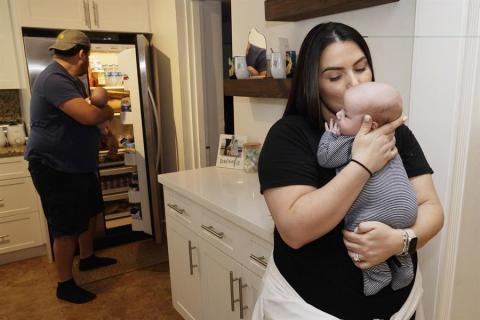 Capri Isidoro broke down in tears sitting on a chair at the office of a lactation consultant. The mother of two had been struggling to breastfeed her 1-month-old daughter ever since she was born, when the hospital gave the baby formula first without consulting her on her desire to breastfeed.

Now, with massive safety recall and supply disruptions causing formula shortages across the United States, she also can't find the specific formula that helps with her baby's gas pains.
"It is so sad. It shouldn't be like this," said Isidoro, who lives in the Baltimore suburb of Ellicott City. "We need formula for our kid, and where is this formula going to come from?"

As parents across the United States struggle to find formula to feed their children, the pain is particularly acute among Black and Hispanic women. Black women have historically faced obstacles to breastfeeding, including a lack of lactation support in the hospital, more pressure to formula feed and cultural roadblocks. It's one of many inequalities for Black mothers : They are far more likely to die from pregnancy complications, and less likely to have their concerns about pain taken seriously by doctors.

Low-income families also face a particular struggle: They buy the majority of formula in the U.S. Experts fear small neighborhood grocery stores that serve these vulnerable populations are not replenishing as much as the larger retail stores and that some of these families do not have the resources or means to hunt for formula.
The Centers for Disease Control and Prevention estimates that 20% of Black women and 23% of Hispanic women exclusively breastfeed through six months compared to 29% of white women. The overall rate stands at 26%. Hospitals that encourage breastfeeding...