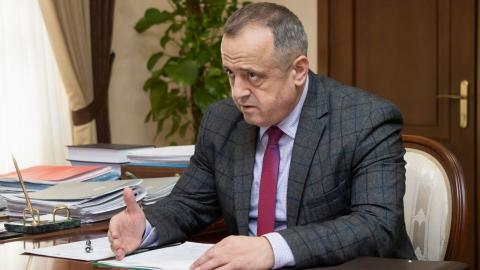 The separatist leader in Transnistria Vadim Krasnoselsky on Friday said he was proposing Alexander Rosenberg, the former Minister of Agriculture, as Prime Minister, after Alexander Martinov was fired on Thursday.

Appointing Rosenberg is seen as a formality as Ktrasnoselsky holds full power in the breakaway Russian-backed region. Rosenberg is considered a technocrat close to the Sheriff holding company that runs the separatist region de facto politically and economically.

The new PM is an electrical and agricultural engineer and previously held several positions in the separatist administration in Tiraspol. In January 2022, he was appointed Minister of Agriculture.

Rosenberg ran the Tiraspol bakery for ten years before becoming Minister of Agriculture and Natural Resources.

A political analyst in Chisinau, Anatol Taranu, told BIRN that the governmental shift is just a small local affair.

"Rosenberg has the vocation of a technocrat rather than a politician. This it is an internal movement within the Sheriff group, with no real connotations for the issue of Transnistrian conflict settlement," he said.

Security expert Ion Leahu told BIRN that Krasnoselski's reshuffles are characteristic of a dictatorial regime that periodically changes people "so they do not forget who the boss is".

Since the start of the Russian invasion of Ukraine, several explosions have rocked the breakaway region. Tiraspol has blamed both Ukraine and Moldova. Moldovan officials have blamed the explosions in Transnistria on local political rivalries.

Experts in Chisinau say the oligarchs running Sheriff are not in...