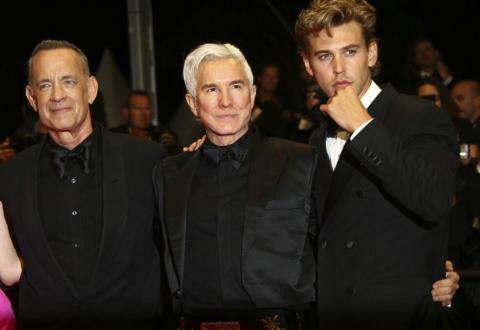 Cannes was shaken, rattled and rolled on May 25 as the world premiere of "Elvis" rocked the film festival on the French Riviera, in what has proven a vintage year for music-lovers.

The highly anticipated new film is the latest from Australia's Baz Luhrmann, the technicolor maestro behind "Romeo and Juliet" and "Moulin Rouge!".

He wore a rhinestone Elvis belt buckle and a blingy pinkie ring with his tuxedo as he walked the famous red carpet for perhaps the glitziest evening of the 12-day festival.

The movie itself was a typical explosion of color and break-neck editing - the 159-minute running time flying past - as rising star Austin Butler, 30, stepped triumphantly into the blue suede shoes of Elvis Presley.

"As a tribute from one champion of outrageous showmanship to another, it dazzles," wrote The Hollywood Reporter.

Luhrmann has become a favorite at Cannes, having wowed critics with his debut "Strictly Ballroom" in 1992, and opening the festival twice, with "Moulin Rouge!" and "Gatsby."

His latest has been warmly welcomed by the family of Presley, who died in 1977 at the age of 42 after a descent into drug addiction, with granddaughter Riley Keough describing it as "a very intense experience."

The King's widow, Priscilla Presley, was a guest at the premiere, along with popstars Kylie Minogue, Shakira and Ricky Martin.

Other stars making an impression on Wednesday evening were Sharon Stone in a pair of Elvis-like aviator shades, and Brazilian model Adriana Lima showing off her...