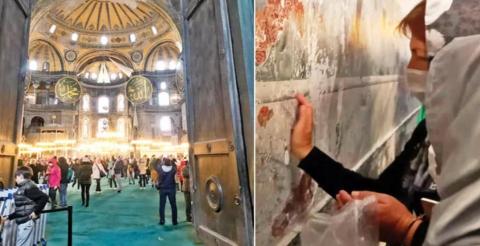 The 1,400-year-old Imperial Gate inside the Hagia Sophia Mosque has been put under protection after it was vandalized by unidentified assailants.

The unpleasant incident had come to light after a photo showing the fragmented door was uploaded by the Association of Art Historians (SATAD) on its social media platforms. "The door must be put under protection," SATAD said in the post.

Most recently, the walls of the Imperial Hall have been scraped away by assailants and taken in plastic bags.

As the incident received backlash from the public, security measures have been tightened inside the mosque.

The hall, which includes the scraped walls and the vandalized Imperial Gate, is now being protected via a black stripe.

There are five to six security personnel along the hall, and while some guard the corridor, others wait in front of the gates.

Almost 70 security guards work in shifts in the mosque, along with the tourism police.

The Imperial Gate is one of the nine doors that opens to the main hall of the mosque. The door is called "Imperial Gate" because it was used by emperors in the past.

The Imperial Hall is about 100 steps long. In the middle, there is the "Imperial Gate," and on its left and right, there are four other doors on each side. Only five of these doors are open.

If there are crowds, these can be opened to the public on Fridays and holidays.

The top section of the mosque is under restoration and thus is currently closed to visitors. The end of the Imperial Hall opens to the mosque's square. This section is used as the exit as it used to be during Byzantine times.

Here there are mosaics depicting Constantine the Great, Justinian the Great, Jesus Christ and Virgin Mary.