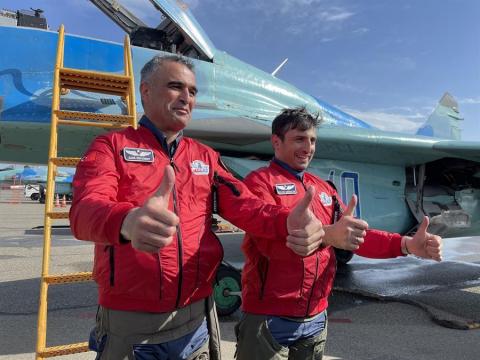 The four-day "TEKNOFEST Azerbaijan," Turkey's biggest aviation and technology festival's first abroad mission in Azerbaijan's capital Baku, started on May 26 with an expectation of around 50,000 visitors.

Some 5,000 contestants will compete in the fest held at Baku's Crystal Hall and the National Park.

Selçuk Bayraktar, the board chairman of TEKNOFEST, who came to Baku by flying in a MIG-29 jet, said he was "happy to be with Azerbaijani brothers."

Saying that "teamwork," "high-tech," "campaign" and "belief" are four words that describe TEKNOFEST, Bayraktar noted that believing in oneself leads to success.

He then asked, "How can one who does not believe that he can do something struggle and reach his or her aim?"

"Those witnessing this moment will be the scientists or engineers leading the world tomorrow," he added.