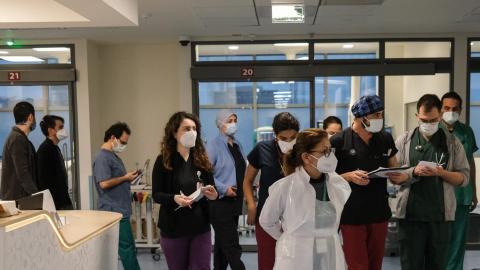 A doctor talks with nurses before their shift next to a sealed intensive Care Unit (ICU) room at the Prof. Dr Cemil Tascioglu City Hospital, in Istanbul, 7 December 2020. Photo: EPA-EFE/SEDAT SUNA

Jail sentences for violence against women and medical workers are increased, and courts cannot make any sentence reductions for these offences.

"The perpetrator's formal attitudes and behaviour aimed at influencing the court in the trial are not to be considered grounds for discretionary reductions," the new law says.

It also defines persistent stalking against women as a crime for the first time, which incurs jail sentences from six months to two years.

Persistent stalkers may be jailed for up to three years, if "the crime is committed against the child or the spouse who has been separated or divorced".

Violence against women and medical workers will also be added to the list of most serious crimes in the criminal code.

Violence against women and medical workers are a major problem in Turkey.

Turkey was the first country to ratify the Council of Europe's Convention on Combating Violence Against Women, the so-called Istanbul Convention.

But Islamist and conservative critics claimed that it undermined traditional family values, and President Recep Tayyip Erdogan withdrew the country from the treaty in 2021.

The report suggested only 11.3 per cent of the attackers...