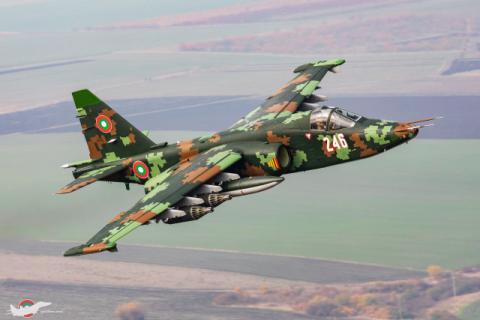 Ukraine has received Su-25 attack aircraft from the West in the form of spare parts, according to the American publication Foreign Policy, which is one of the two media with exclusive access to the so-called International Donor Coordination Center. In it, 110 soldiers are helping to track arms shipments around the clock. For their transportation, the planes were pre-dismantled in Eastern Europe.

"The European Command Field Group in Eastern Europe has helped dismantle Soviet Su-25 planes and Mi-17 helicopters so that they can be sent to Ukraine," the paper said.

The number of "delivered in bulk" aircraft is not specified in the information of Foreign Policy but a little later the specialized Polish portal for defense and armaments Defence24.pl wrote, citing Nexta, that the machines are 14 and are from "one of the Eastern European partners ". The planes reached Ukraine by land.

Foreign Policy adds that the moment a donor of weapons needed by Ukraine appears in the center, it is specified how to deliver them to Ukraine - by road, air or rail via one of several hubs in Europe, depending on which one is most effective.

The weapons could be subcontracted or assembled by Ukraine's armed forces, a British military official said. Work has become more complicated as Ukraine's needs for small arms and light weapons have expanded, such as Javelin anti-tank missiles and Stinger anti-aircraft missiles (which have halted Russia's offensive against Kyiv) to aircraft, tanks and other military equipment.

Poland has handed over to Ukraine virtually its entire stockpile of spare parts for the MiG-29, the Czech Republic - Mi-24 attack helicopters, Lithuania has announced its intention to supply armored personnel...