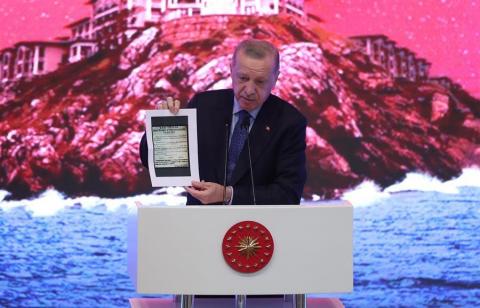 The ruling Justice and Development Party (AKP) "has never succumbed to threats or blackmail" and "along with our nation have defeated every attempt targeting our democracy," President Recep Tayyip Erdoğan has said.

Speaking at a commemoration on May 27 with the theme of "Yassıada Court on Trial" on the 62nd anniversary of the May 27 Coup at Adnan Menderes Congress Center on Democracy and Freedoms Island, Erdoğan remembered Adnan Menderes, Hasan Polatkan and Fatin Rüştü Zorlu, who were hanged following the May 27, 1960, military coup, with grace and gratitude.

"Mr. Menderes' heartbreaking photograph at the gallows constantly reminded to tune up politicians," he said.

"The dark shadow of Yassıada [trials] lingered over civilian politics for decades. When we set out with the aim of a great and powerful Türkiye, they also put that photograph in front of us."

Erdoğan has also called on all the political parties, especially the oppositional alliance, to pursue responsible politics ahead of the 2023 elections in a bid not to harm the unity of the Turkish society.

"In this very critical process towards the 2023 [polls], everyone, especially the opposition should act with responsibility and common sense. We will never forget the night of July 15 [2016]," Erdoğan said at an event on the occasion of the 62nd anniversary of the May 27 coup d'état on the Democracy and Freedom Island on the Marmara Sea.

Erdoğan referred to the coup attempt staged by the FETÖ in 2016 that could be thwarted after tens of thousands of people hit the streets to defend against coup plotters.

"Turkey is a democratic state and has a rule of law. Turkey is a big state in which sovereignty unconditionally belongs to the people. Turkey, with its economy,...