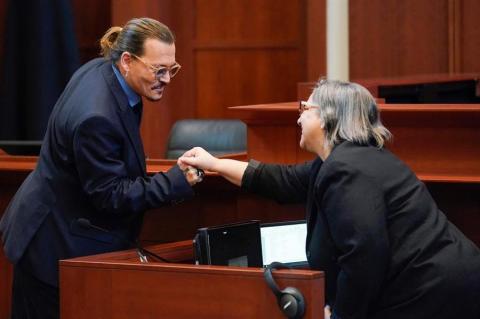 A jury began deliberations on May 27 in the blockbuster defamation case between Johnny Depp and his ex-wife Amber Heard after a six-week trial featuring blistering mutual accusations of domestic abuse.

The seven-person jury met for about two hours after lawyers delivered closing arguments in the case heard in Fairfax, Virginia, near the US capital.
The jury, which is considering both Depp's defamation claim against Heard and her counterclaim against him, will resume deliberations on Tuesday after the holiday weekend.
Elaine Bredehoft, an attorney for Heard, said the defamation suit filed against the "Aquaman" star by Depp and a campaign of "global humiliation" has made her life "pure hell."
"It has destroyed her life. This has consumed her. She's getting death threats," Bredehoft told the jury.
Benjamin Chew, one of Depp's lawyers, countered that while the 58-year-old "Pirates of the Caribbean" star may not be a "saint" and has struggled with drugs and alcohol, "he is not a violent abuser."
"He did not and does not deserve to have his life, his legacy destroyed by a vicious lie," Chew said. "Miss Heard's attempt to paint herself as a heroic survivor, an innocent survivor, and Mr Depp as a terrifying abuser, are utterly false.
"We ask you, we implore you, to give him his name, his reputation and his career back," he told the jury.
Bredehoft said any damage to Depp's career was self-inflicted.

"Hold this man responsible," she told the jury. "He has never accepted responsibility for anything in his life.
"He's blamed everybody in the world -- his agent, his manager, his lawyer, Amber, his friends, everybody."
Depp's lawyer Chew meanwhile referenced the #Metoo movement but said "it's for true survivors of...