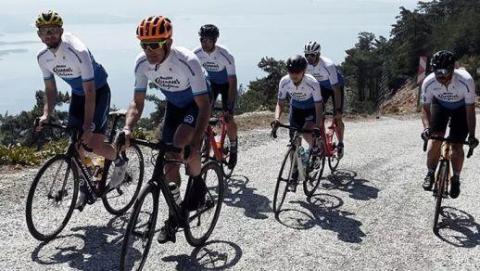 More than 300 cyclists from some 12 countries will compete in the "Santini Queens of the Aegean Boostrace" race on May 29 in the southwestern province of Muğla's Marmaris district, a tourism hub in the region.

Being held in Turkey for the first time within the coordination of the Turkey Tourism Promotion and Development Agency (TGA), the race is famous for being called "Queen Cycling."

"This is a race consisting of only queen stages, which refers to the most difficult stages in bicycle races," officials said on the international race's official website, queencycling.com.

The races will be held on two tracks, a 145-kilometer "big track" and an 80-kilometer "short track," between the center of Marmaris and the Akyaka neighborhood.

A boost zone, where fresh seasonal fruits from the area, freshly cooked cultural tastes, energy drinks and food are served, will be waiting for cyclists after each queen climb stage.