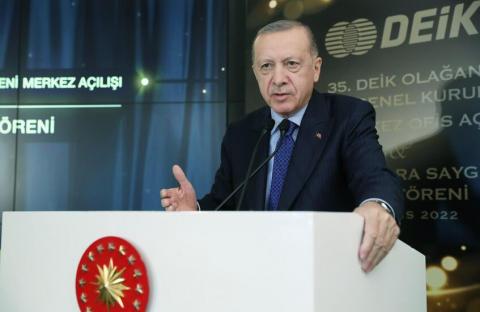 Turkey's president on May 27 spoke in support of the country's economic policy program, underlining that it is consistent and suitable given the current situation in the world.

President Recep Tayyip Erdoğan made a speech at the opening ceremony of the headquarters of the Foreign Economic Relations Board of Turkey (DEİK) in Istanbul.

Erdoğan stressed that the country is looking for an economic solution that promotes production, employment, and exports rather than the imposition of linked interest and inflation.

"The DEİK, introduced in Turkey by the late Özal, is the engine and symbol of the Turkish business community's power in the international arena. I remember with gratitude everyone who has assumed duties in the administration, business councils and activities of the DEİK since its establishment, and with mercy those who have passed away. Jointly founded by all the leading entities and institutions of the business community in our country, the DEİK is the largest and the most inclusive platform in its field," he said.

Noting that way more important duties now await the DEİK since Turkey is gearing up to become one of the top 10 economies of the world, President Erdoğan said: "Aiming to conduct trade diplomacy, mirror our country's power across the world and act as the polestar of the Turkish business community, the DEİK will have obtained an infrastructure in keeping with its goals with the inauguration of its headquarters today. I hope the DEİK headquarters may lead to auspicious developments for our country and business community."

Congratulating the recipients of economy awards delivered as part of the ceremony, Erdoğan offered his gratitude to anyone who contributes to production, exports and employment in Turkey, and...