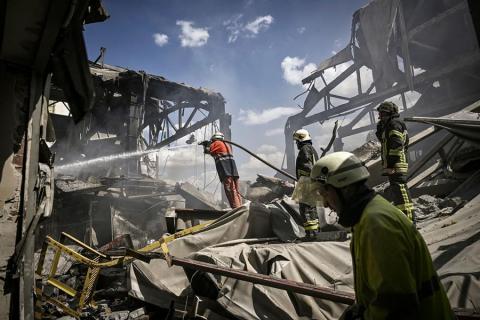 Ukraine has pledged to do "everything" to defend Donbas, where an intensifying Russian offensive is prompting Kiev's forces to consider a strategic retreat from some key areas to avoid being surrounded.

Russia is waging all-out war for the eastern Donetsk and Lugansk regions that make up Donbas -- the country's industrial heartland -- where Ukraine's President Volodymyr Zelensky has accused Moscow of carrying out a "genocide".
In his daily address to Ukrainians, Zelensky said the Russians had "concentrated maximum artillery, maximum reserves in Donbas."

"There are missile strikes and aircraft attacks -- everything," he said.
"We are protecting our land in the way that our current defense resources allow," he added. "We are doing everything to increase them."
Pro-Russian separatists said Friday they had captured the town of Lyman between Severodonetsk and Kramatorsk, on the road leading to the key cities still under Kiev's control.
Russian forces are also closing in on Severodonetsk and Lysychansk in the Lugansk province, with conflicting reports about the extent of their advance.
Regional governor Sergiy Gaiday insisted that the Russian forces would not be able to seize the entire region within two to three days -- but said that Ukraine's troops may have to withdraw from some areas to avoid being surrounded.
"Most probably they will not seize (Lugansk), because there's enough strength and means to hold the defence," he said on Telegram.
"Maybe even to avoid encircling there might be a command to our troops to retreat."

A Lugansk police official, cited by Russia's state news agency RIA Novosti, said Severodonetsk was "now surrounded" and Ukrainian troops could no longer leave the city.
That was...