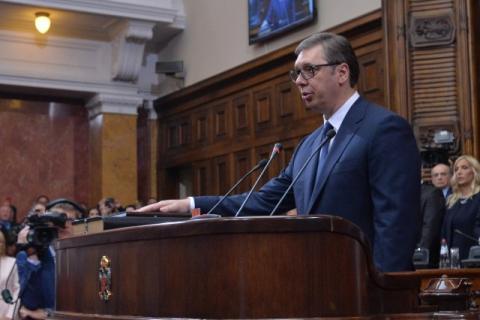 Sinia Mali congratulated Vui: "I know how dedicated you are in fighting for our beautiful country"

After taking the oath in the parliament and starting his second term, the president went to the building of the Presidency of Serbia, and from Nikola Pai Square to Andriev Venac he was accompanied by applause from the gathered citizens.
In front of the parliament, Vui approached Serbs from Kosovo and Metohija, who were waiting for him with a banner that read "Serbs from Kosovo and Metohija are with their president, Aleksandar Vui". He thanked them for coming and took photos with them.
He also thanked the Krajina group for their support, who greeted him with a song in their traditional costume. Vui then went to his office at Andriev venac,...