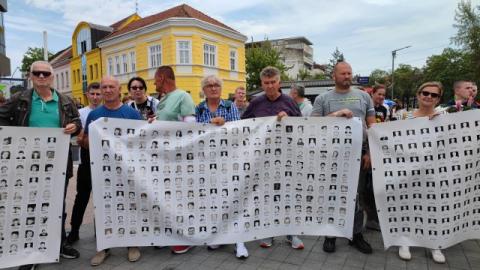 War victims' associations, rights activists and Western diplomats in Bosnia and Herzegovina have criticised a police ban on a march marking the annual White Ribbon Day in Prijedor, which is intended to commemorate the 30th anniversary of the start of wartime persecution by Bosnian Serb forces in the area.

The Interior Ministry in Bosnia's Serb-dominated entity Republika Srpska, where Prijedor is located, told BIRN that the local police administration decided to limit the event to a gathering in a city square within a limited time period on Tuesday "in order to reduce the danger to the safety of people and property and the danger of disturbing public order and peace".

"This is contrary to international human rights standards on peaceful assembly. Instead of restricting the space for civic expression, the authorities should facilitate it and counter the denial of war crimes," Mijatovic said.

The US embassy in Sarajevo also condemned the decision, saying that the authorities in Prijedor have the responsibility to promote tolerance and respect for war victims.

"Limiting victims' ability to commemorate their suffering erodes mutual trust and undercuts prospects for reconciliation, which is necessary to secure a peaceful and prosperous future for all [Bosnia and Herzegovina's] citizens," the embassy said in a statement on Twitter.

It added that the right to peaceful assembly is guaranteed in Bosnia and Herzegovina's constitution.

After the march was banned, hundreds of people joined the commemorative gathering in Major Zoran Karlica Square in Prijedor on Tuesday. Participants tied white ribbons to...