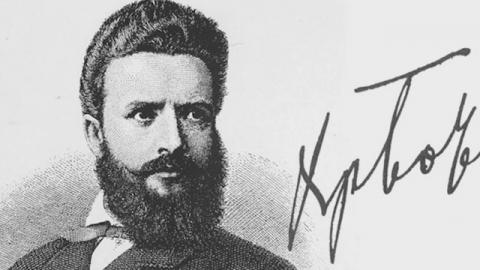 Hristo Botev is one of the brightest figures in Bulgarian history - a great national hero and revolutionary who dedicated his life to the freedom of our country. We also know Botev as a publicist and poet with amazing works that to this day touch our hearts and which Bulgarians recite by heart. Born and raised in the family of the teacher, writer and public figure, teacher Botyo Petkov and Ivanka Dryankova, Hristo Botev went through an important period of self-awareness on the way to his heroic deeds. He lost his life only at the age of 28, but his memory remains alive forever.

On the eve of the day of Botev and those who died for the freedom of Bulgaria, we will present you some interesting facts from the life of the revolutionary - some famous, others less known, but still interesting.

Where was Hristo Botev actually born?

Bulgarians have known since their school years that Botev was born in Kalofer. He himself stated this in his document from 1868. Here is what he wrote in his application for admission to the Bucharest Medical School:

"I, the undersigned, Orthodox by religion, ethnicity - Bulgarian, born in the town of Kalofer, Karlovo district, Plovdiv region, I want to learn the medical art…"

However, there is a legend according to which Botyo Betkov taught in the village of Osen and it was there that his first son was born. Botev was baptized in the church in the neighboring village of Devene due to the lack of a church in Osen. Unfortunately, this very page of the register was torn off and the only evidence remained in Botev's publications.

Historians claim that the hometown of Botev and his father is Karlovo. The proposals were prompted by stories of a relative of the...