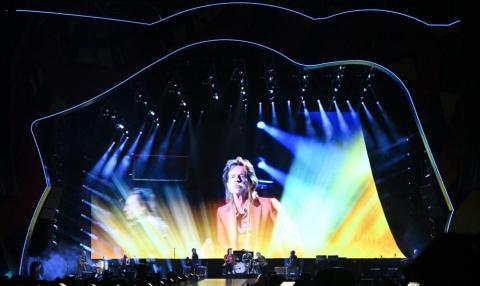 British rock legends The Rolling Stones on June 1 opened their European tour with a gig in Madrid to mark six decades since the band was formed.

The Sixty tour will include 14 concerts across Europe with the first taking place in the Wanda Stadium, home to Atletico Madrid football club.

It follows the band's "No Filter" tour, which began in 2017 but saw the North American leg postponed due to the pandemic.

After a long delay, they resumed the tour late last year, wrapping it up with a million tickets sold, although missing their drummer Charlie Watts who died in August at age 80.

The Rolling Stones helped define the Swinging Sixties and the hippie era with timeless hits such as "Jumpin' Jack Flash" and "(I Can't Get No) Satisfaction."

"Sympathy for the Devil in Madrid. The Stones are in town! Countdown to the first show is on!" they wrote on Instagram, posting a picture of the Fallen Angel fountain in the Retiro Park, referencing one of their best-known songs.

"Enjoying lots of what Madrid has to offer, from fallen angels to Flamenco!" tweeted Jagger, with pictures of him having a beer and visiting Picasso's "Guernica."

He also posted a brief flamenco-style clip of "Paint It, Black."

The Stones will tour 13 cities in Europe, playing two gigs in London.

Following the opening night in Madrid, they head to Munich and then on to Liverpool to play at the city's Anfield football stadium in what will be their first gig in more than 50 years in the hometown of The Beatles.