The Bulgarian Cultural Center in North Macedonia was Set on Fire 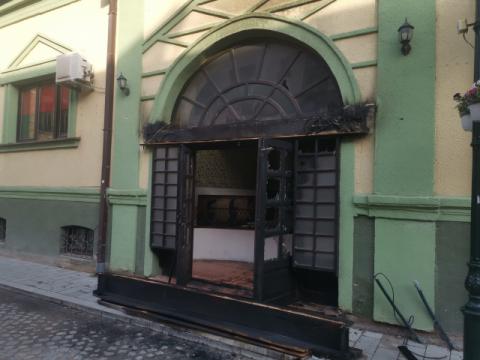 Early this morning, the "Ivan Mihailov" Cultural Center in the town of Bitola, in the Republic of North Macedonia, was set on fire.

The incident happened in the early hours of the day. "We expect all competent institutions to reveal the perpetrators of this act of vandalism as soon as possible," was written on the Facebook page of the "Ivan Mihailov" Cultural Center. They expect "the perpetrators to take full responsibility for what happened."

The Minister of Foreign Affairs Teodora Genchovska will visit the place of the incident and will hold a conversation with the representatives of the association. This was announced by the Bulgarian Ministry of Foreign Affairs in connection with the incident related to the burning of the front door of the Cultural Center "Ivan Mihailov" in the town of Bitola, Republic of North Macedonia.

On June 4th and 5th, Minister Genchovska will pay a working visit to the Republic of North Macedonia at the invitation of her counterpart, Bujar Osmani. The visit is aimed at continuing the dialogue between the ministries of the two countries on open bilateral issues related to the implementation of the Treaty of Friendship, Good Neighborliness and Cooperation. The talks will also focus on issues related to the European integration of the Republic of North Macedonia.

"The Ministry of Foreign Affairs of the Republic of Northern Macedonia strongly condemned the act of deliberate burning at the entrance of the "Ivan Mihailov" Association in Bitola. This vandalism is another proof that there are many actors who are against the progress in the relations between North Macedonia and Bulgaria and our common European future," the statement said, quoted by RNM media. "This...