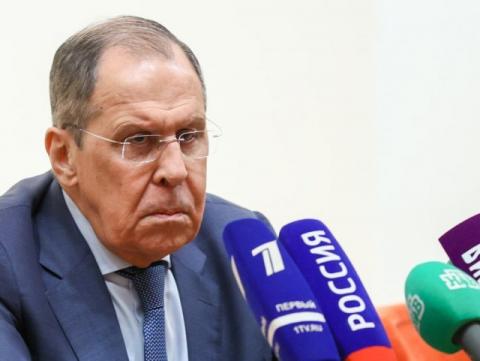 Russian Foreign Minister Sergei Lavrov's visit to Serbia has been cancelled after countries around Serbia closed their airspace to his aircraft, a senior foreign ministry source told the Interfax news agency on Sunday.
"Those reports are accurate," a high-ranking source in the Russian Ministry of Foreign Affairs told Interfax today.
The source confirmed a Serbian media report that said Bulgaria, North Macedonia and Montenegro had closed their airspace to the plane that would have carried Moscow's top diplomat to Belgrade on Monday.
The agency states that when asked whether Lavrov's visit to Serbia was canceled because of that, the diplomat noted:
"Our diplomacy has not yet mastered the ability to teleport".
This Interfax news was also transmitted by the Reuters agency, which states that Lavrov's visit to Belgrade was canceled, after these three countries closed the airspace for the flight of his plane.
Russian Ambassador to Montenegro Vladislav Maslenjikov confirmed to RIA Novosti that Lavrov was not allowed to fly through the airspace of Montenegro, stating that Podgorica refused to allow the Russian government aircraft to fly in the airspace of that country.
Earlier, Radio Free Europe reported that the Ministry of Foreign Affairs in Skopje confirmed for that media that North Macedonia rejected the request of the Russian Embassy to use the airspace of that country for the flight of Lavrov's plane.
Earlier today, Vecernje Novosti reported that Bulgaria, Montenegro and North Macedonia refused to allow the plane of the Russian Minister of Foreign Affairs through their airspace.
The visit of the head of Russian diplomacy was announced from Moscow, on Monday and Tuesday, June 6 and 7.
However, the President...