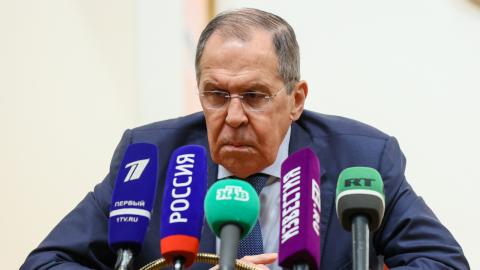 "Something unprecedented happened. A sovereign country has been deprived of its right to conduct a foreign policy. The international activities of Serbia, related to Russia, have been blocked," Lavrov said.

Moscow's top diplomat blamed the EU for the move, saying that it was not allowing Balkan countries to freely choose their partners

"NATO and EU want to turn the Balkans into a project of their own called 'closed Balkans'," Lavrov said in a reference to the Open Balkan cross-border economic project.

He added that "if a visit by a Russian foreign minister is being seen in the West as something close to a global threat, then by all accounts things within the West are pretty bad".

Lavrov promised invite his Serbian counterpart Nikola Selakovic to visit Moscow because he was not able to travel to Belgrade.

North Macedonia, Montenegro and Bulgaria, all NATO countries and Serbia's immediate neighbours, closed their airspace to an official plane that would have carried Lavrov to Belgrade on Monday.

The Kremlin described it as a "hostile" move, although Lavrov said that in retaliation, his country would not do anything "that can disrupt the relations between the people" of the three Balkan countries with Russia.

Russia's RIA Novosti cited Russian diplomatic sources hinting at a possibility that the Bulgarian and Montenegrin ambassadors will be expelled from Moscow.