Vučić re: Lavrov's cancelled visit: "Who are you kidding?! I have a very bad feeling" 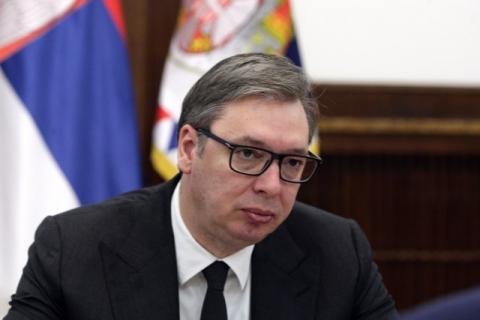 Vui spoke about the details of the cancellation of the visit on Monday night in the RTS Daily.
"I must say that I am not surprised," Vucic said at the beginning.
"I said that I expect complications... We are skeptical about whatever I say, it was not too much of a surprise. We followed day by day how it went, changes in the route," he said.
"Of course you have to express your dissatisfaction. First of all, I haven't seen the kind of hysteria that little Serbia has been exposed to in Europe and the world due to the arrival of Lavrov for a long time. You can't believe how much pressure there was on Serbia because of that visits", he said.
"I do not think that this is my personal courage, but a reasonable and calming road to Europe, where it is not easy to hear the voice of reason and dialogue today, it is not a question of gaining or losing political points," he said.
"I don't understand, look at everyone from the environment, their media and politicians... We received more media representatives in Serbia since I don't know when, waiting for them to attack and blacken Serbia. And what did Serbia do wrong? Who did we harm or is it just our refusal to be part of the pack that causes someone a headache? You could watch that hysteria, directed at Serbia. They realize that they can't do anything to Russia, so they are 'taking it out' on Serbia, from Carl Bildt, to Croatia", Vui said.
"If you look at the vocabulary they use, in which someone doesn't treat us like a neighbor and a friend... If I wanted to behave like them, I would say - I'm sorry, I'm not particularly fascinated by their threats and commanding tone. I'd rather someone want to talk to us. We have condemned the incursion into Ukraine, but Russia is a traditional friend of...