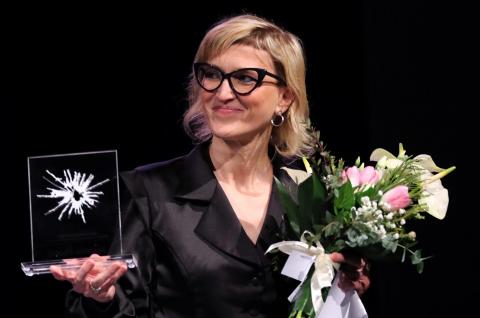 The director of 'Quo Vadis, Aida?', Jasmila Zbanic, has seen her award-winning film and its cast targeted with threats, insults and hate speech over the past year, but she has not given up on her quest to get it shown in Serbia and Bosnia's Serb-dominated Republika Srpska entity.

Zbanic told BIRN that new discussions are underway to broadcast the first cinematic drama about the Srebrenica genocide based on court-established facts and testimonies by survivors on Serbian public broadcaster RTS or to show it in a major cinema in the country.

She explained that she wants the film to be screened on July 11, the date on which the Srebrenica genocide is commemorated each year.

"I think the film and the topic deserve it and I think it is about time for people to see what actually happened," she said.

The film has received various accolades, including being nominated for Best International Feature Film at the Oscars and winning the best film prize at the European Film Awards. But a year after its initial release, it has only been shown once in Serbia, in the Bosniak-majority city of Novi Pazar, and only once in Republika Srpska. In both Serbia and Republika Srpska, the authorities do not accept that the massacres of Bosniaks from Srebrenica by Bosnian Serb forces constituted genocide, despite the rulings of international courts.

Zbanic said that it was clear to her that the film about the experiences of a United Nations interpreter during the fall of the UN-protected zone of Srebrenica at the beginning of the genocide in July 1995 would encounter resistance in Republika Srpska and Serbia, but she hoped it would at least premiere in cinemas like her movie 'Grbavica', a drama about a wartime rape, did 15 years ago.