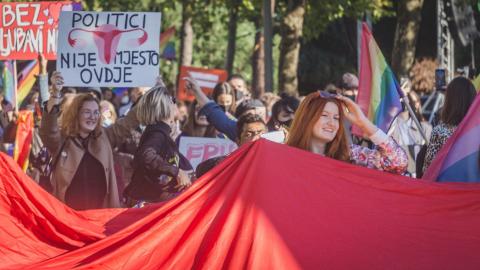 LGBT Forum Progress's executive director, John Barac, said that Montenegro has failed to make legal changes to allow Montenegrins in same-sex partnerships to register their marriages in their home country.

"Montenegrin citizens who have married abroad cannot register their partnership in Montenegro, even its their right according to a law that was adopted two years ago," Barac said in a press release.

"State institutions, intentionally or not, failed to harmonize legislative necessary for the implementation of the Law on Same-Sex Partnerships," he added.

In July 2020, parliament in Montenegro voted to legalise same-sex civil partnerships by a very narrow majority.

By law, the government had a deadline of last July to harmonise the country's legislative framework with the new law under which same-sex couples can enter into a legal union at their local registry office.

The law also allows the regulation of mutual financial support and division of joint property in the event of divorce. It grants those in a same-sex civil partnership the right to social security and health cover based on their partner, but does not provide the right to adoption or the fostering of children.

On July 26, 2021, the first same-sex marriage was registered in the coastal resort of Budva, which was praised by officials who promised that the legislative framework would be harmonized to take account of the new law. This did not...