Vučić from Ohrid: "When we are together, we are much stronger" PHOTO / VIDEO 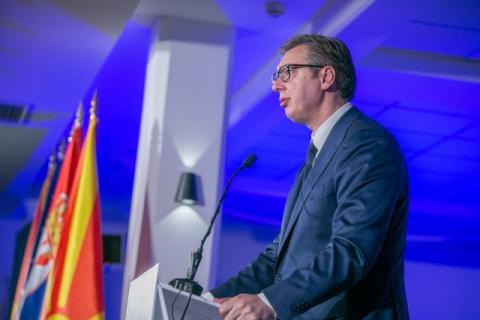 The summit is attended by Serbian President Aleksandar Vucic, prime ministers of North Macedonia and Albania, Dimitar Kovacevski and Edi Rama, as well as officials from Montenegro and Bosnia-Herzegovina.
President Vucic said that he had meetings with representatives of countries that are not yet official members of the Open Balkans.
"We sent an invitation to Montenegro, and the invitation to Bosnia-Herzegovina will be sent soon," said Vucic.
As he says, last night the idea was launched about creating working groups and teams that would analyze the situation in which the region finds itself and how we could help ourselves. Vui said that a big fair of wine, food and tourism was being prepared in Belgrade, and added that he would like the next meeting to be somewhere in the south of Serbia.
"It is important that we find a common approach to solving the problem," Vucic said. "When we are together, then we are much, much stronger. Serbia has the most food, flour, oil, sugar, we have all that," said President Vui at the beginning of his address to the media.
President of Serbia, Aleksandar Vui, said that he was already "looking with horror" at what would happen around energy. He said that in the region we must cooperate closer, to prepare a large Fair of Wine, Food and Tourism in Belgrade, and to organize the next meeting in Vranje or Leskovac, in the south of Serbia.
"Let's see how to help the citizens of all our countries, to approach solving problems together. That is important for the people," said Vucic.
He noted that it is good that France has given up on the overhaul of seven nuclear power plants, which will have a deflationary effect on the price of electricity, and it is encouraging before the coming winter in the whole...