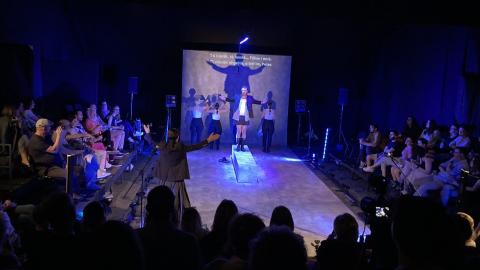 Some controversies never age and some resurface in different form.

That's what happened on a recent Friday in the Kosovo capital, Pristina, when the furore over Austrian writer Peter Handke's 2019 Nobel Prize for Literature was repackaged for the theatre.

It was not so much Handke's work that was on stage, but the words and actions of a man who delivered a eulogy at the funeral of Serbian strongman Slobodan Milosevic in 2006 and cast doubt on the massacres of Muslim Bosniaks during the 1992-95 Bosnian war.

Celebrated in Serbia and in the Serb-dominated part of Bosnia, his Nobel Prize was lambasted in other parts of the former Yugoslavia, where Handke is seen as an apologist for the Greater Serbia ideology that fuelled the wars.

The decision by the Swedish Nobel Committee triggered debate over whether a writer's work can be viewed and appreciated independent of his or her moral or political views.

"Our position is clear: fabrication of the truth, genocide-denial and support for war criminals cannot be 'sold' to the public as 'literature'," she told BIRN. "And those viewpoints cannot be considered and tolerated under the concept of 'artistic freedom'.

The play premiered in Pristina on June 3 and arrives in Belgrade, the Serbian capital, on Thursday.

Spoke in support of war criminals

Peter Handke at the Nobel banquet at the City Hall in Stockholm in December 2019. Photo: PA-EFE/ANDERS WIKLUND/POOL.