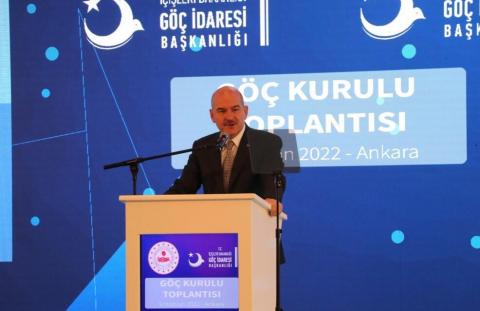 Turkey is facing fresh refugee influx from the regional countries but is taking new measures to stop these new migrant inflows, Interior Minister Süleyman Soylu has said, stressing that migration is a growing humanitarian problem around the world.

Minister Soylu announced new measures to discourage the migrants' travel inside Turkey while the security institutions are imposing new precautions to stop the arrival of new irregular migrants to Turkey, at a meeting held by the Migration Council on June 9.

Turkey has been trying to manage the irregular migration from Syria, Iraq and other Middle Eastern countries over the past decade, Soylu said, "There are two neighboring countries: Syria and Iraq. PKK/PYD and the DAESH did everything to ruin the order in these two countries. They sought to destroy the integrated authority there."

The minister repeated that there is no xenophobia in Turkey as the Turkish civilization does not embrace such a thing, noting "But the West has it. Because their civilization is open to this. Our civilization sees every human being as the world itself. This is very clear."

Some politicians in Turkey want to use that as a tool in the upcoming elections, he stated, "We should not fall into this trap. Migration is the problem of humanity. These people with their babies in their cradles leave their homes because of the war and nothing else."

Turkey is currently hosting around five million refugees with 3.7 million of them Syrians. The government is under fire for not taking sufficient measures to stop the flow...