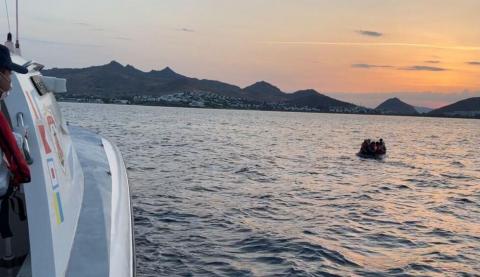 The first team patrolled the Dikili coasts upon notifications that some migrants on a dinghy were floating on the sea.

Some 38 migrants on the boat were saved as another team sailed to the sea following another notification.

During the second patrol, the Coast Guard found some 39 irregular migrants on a boat.

The nationalities of the migrants were identified as all 77 were delivered to the provincial migration office.

Two pushback incidents occurred a day after the Coast Guard of the southwestern province of Muğla saved some 16 migrants off the Bodrum coast.

The video showed a Greek ship pulling a rubber boat full of migrants toward Turkish waters.

"They caught us and told us to return to Turkey. They tied our boat with a rope and pulled us to the Turkish waters," a migrant told TRT Haber.

"I was scared by the Greeks' attitudes. They left us to die," said another migrant.

Thanking the Turkish Coast Guard for saving their lives, one of the migrants accused Greek officials of beating them.