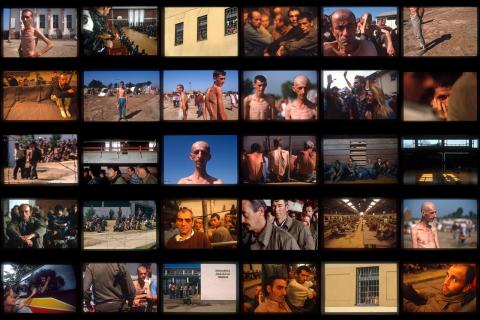 Ron Haviv's photographs depicting the suffering of prisoners who were detained in the Prijedor, Mostar and Banja Luka areas during the war in Bosnia and Herzegovina went on display at the Endzio Hub gallery in Belgrade on Thursday evening at an exhibition entitled 'Liberty'.

"To see the loss of liberty up close - the fear pervading everywhere, the desire for survival, the interminable waiting for the next step, and the hoping for the eventual release - is devastating. Liberty is something so basic that without it, there can be nothing," Haviv told BIRN by email ahead of the opening.

The images in the exhibition show prisoners from all sides of the inter-ethnic conflict and are intended to foster a deeper understanding how detainees were mistreated during the Bosnian war.

Many of Haviv's photographs, particularly his pictures of warlord Arkan's 'Tigers' paramilitary fighters, have become symbolic images of the war, and some have been used in trials at the International Criminal Tribunal for the Former Yugoslavia.

This is not Haviv's first exhibition in Serbia. In 2002, his images from the 1990s Yugoslav conflicts were displayed in six cities, but all of them were marred by incidents and in some cities, the exhibition was cut short or only held for one day. In Novi Sad, Haviv's photos were shown without captions.

"The work was mostly looked at through one prism and not an understanding of the suffering all people from the Former Yugoslavia experienced," Haviv recalled.

The 'Liberty' exhibition, organised by the Belgrade and Sarajevo offices of the German NGO forumZFD and Prijedor-based Foundation for the Construction of the Culture of Remembrance - IKS Foundation, is open from June 10-16, from 12 noon to 8pm.