The meeting between Vučić and Scholz started; "Welcome to Serbia" PHOTO / VIDEO 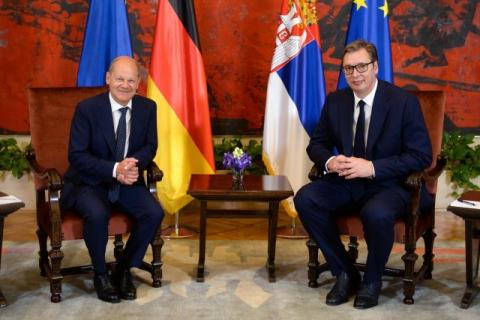 Scholz was welcomed at the Belgrade "Nikola Tesla" airport by the President of Serbia, Aleksander Vui, who is the host of today's meeting.

After that, a welcoming ceremony followed in front of the Palace of Serbia.

Shortly afterwards, a meeting between Serbian President Aleksandar Vui and German Chancellor Olaf Scholz started.
It is expected that the main topic of the meeting will be the harmonization of Serbia with the EU foreign policy, i.e. joining the sanctions that the Union imposed on Russia due to the war in Ukraine.
An important topic of the meeting between Vui and Scholz, which will be followed by plenary talks between the delegations of Serbia and Germany, should be the revival of the dialogue between Belgrade and Pritina.

President of Serbia welcomed Scholz and expressed satisfaction with today's meeting.
"Welcome to Serbia, Federal German Chancellor! I am looking forward to today's meeting and the opportunity to discuss topics of interest to both countries," Vui wrote on the Instagram account "Budunosrbijeav", with a photo of the welcome at the "Nikola Tesla" airport.

It is also planned that Vui and Scholz will address the media after the meeting, and the address will be broadcast live on TV B92.
German chancellor arrived in Belgrade from Pristina, and in the evening he will depart from Serbian capital to Greece.