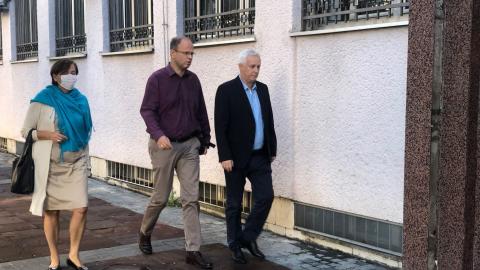 "The decision has been made and at the beginning of next week, [the case] will be returned to the lower court," the Supreme Court told daily newspaper Vijesti.

In the second-instance verdict in the case in October 2020, Montenegrin Higher Court found Martinovic guilty of mediation in drug trafficking and sentenced to a year in prison.

Martinovic said he will continue to try to prove his innocence.

"Unfortunately, in Montenegro, it is not up to the prosecutor to prove guilt, but up to journalists to prove their innocence. This retrial could be good for media freedom and I will continue to fight," Martinovic told BIRN.

He was arrested in October 2015 alongside 17 others from Montenegro in a joint police operation conducted with Croatian police. He spent almost a year-and-a-half in custody before being released in January 2017 ahead of the trial.

He was convicted in the first-instance ruling in January 2019 of drug trafficking and membership of a criminal organisation but the Appeals Court overturned the verdict and ordered the first retrial.

The journalist always insisted he had made contacts with alleged drug traffickers only as part of his legitimate reporting work.

Martinovic made contacts with two of the 17 suspects arrested in 2015: Dusko Martinovic - no relation to the journalist - and Namik Selmanovic.

Dusko Martinovic, the main suspect in the case, was also a convicted member of a gang of jewel thieves known as the Pink Panthers. Operating in the US, Europe, the Middle East and Asia, they are believed to have stolen hundreds of millions of euros' worth of jewellery. Journalist...