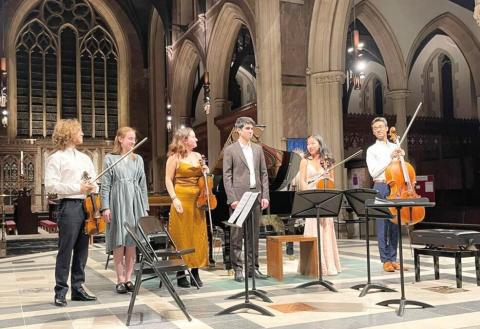 Emre Şener is among the composers to take part in the '200 Pieces' project that will mark the bicentenary celebrations of the Royal Academy of Music in the U.K.

The Royal Academy of Music, one of the world's top five music schools, has commissioned 200 musicians to compose pieces to mark the occasion.

Emre Şener, who studies composition at the academy, is among those 200 musicians who include renowned composers Hans Abrahamsen, Sir George Benjamin, Sally Beamish and Daniel Kidane.

The world premiere of Şener's piece will take place at the Royal Academy of Music's Duke's Hall on July 8 and later will be launched on the special website dedicated to the "200 Pieces" project.

Şener was one of the two students who were admitted to the Royal Academy of Music in 2020 to pursue study in composition and contemporary music.

"It's tempting to look to the past, but we want to point forward to the Academy's work in its third century," Jonathan Freeman Attwood, principal at the Academy, said of the 200 Pieces project.

The Royal Academy of Music was founded in 1822 and admitted its first student in 1823.

The alumni of the academy, which received its royal charter in 1830, include Sir Simon Rattle, Sir Harrison Birtwistle, Sir Elton John and Annie Lennox.

Şener was an invited artist to the 2021 Season of 'Paris Youth Music Society' and conducted his own piece at the Paris Conservatoire last year. He was also invited to 'Les Journées de Pont ar Gler' festival in May.

He was the winner of the Ataneo de la Laguno composition award in Spain.

His award-winning work will be performed at the Auditorio de Tenerife in the Canary Islands on June 17.