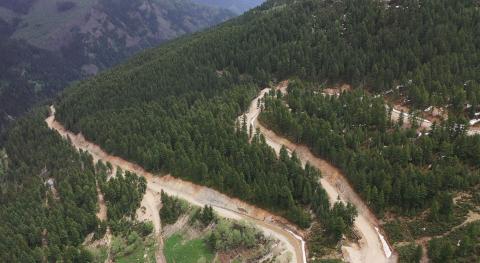 As a child, Abedin Pepaj would travel by horse or tractor to spend the summer with his family in the mountains that straddle Kosovo's western border with Montenegro, enjoying the panorama and the cool mountain air.

Today, he's building a small wooden house on the foundations of the old dwelling that has been in his family for generations. Neighbours are trickling back too, fixing up homes that had fallen apart through years of neglect.

They were spurred by the start of construction in 2015 of a new road to connect the municipality of Deçan/Decani with Plav in Montenegro, on the other side of the mountains.

The road would cut Pepaj's journey significantly. But he and his neighbours are still waiting.

More than six years on, construction has been blocked by the objections of the Serbian Orthodox Church, which says the road runs too close to the 14th century, UNESCO-protected monastery Visoki Decani and violates Kosovo's Law on Special Protected Areas.

Years of negotiations have failed to resolve the issue.

"The [old] road is difficult to drive on and it costs us so much to come here," said Pepaj. "I think a solution should be found to avoid problems with the monastery."

A UNESCO World Heritage Site, Visoki Decani is nestled in forests on the edge of Deçan/Decani. Since the 1998-99 Kosovo war, when NATO intervened with air strikes to drive out Serbian forces accused of killing and expelling civilians during a brutal counter-insurgency campaign, the monastery has been protected by NATO peacekeepers.

Kosovo declared independence from Serbia in 2008, promising to protect its small Serb minority and their religious sites on territory considered by many Serbs to be the...