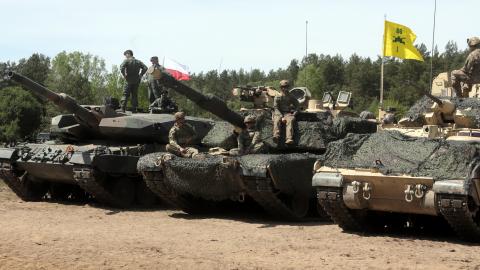 The total number of battle-ready forces now comprises some 40,000 troops. The US on its own has also moved additional troops to these countries based on its own bilateral agreements with them.

BIRN looks at some of the recent NATO military deployments on its eastern flank, from Bulgaria to Poland, designed not only to boost the armed forces of these countries but also to send a clear message that NATO's article 5 - which deems an attack on one member an attack on them all - is alive and kicking.

It has learned that more than half of these 40,000 troops have been deployed in Bulgaria, Romania, Hungary and Slovakia and Poland.

Designed to boost capabilities and deter

At a first glance, stretching 40,000 troops along NATO's 2,500-kilometres-long eastern and south-eastern periphery may not sound that much.

But on closer inspection, it can be seen that these troops are not there to operate alone but as integrated with the host countries' own national armed forces.

The five countries that BIRN looked at - Bulgaria, Romania, Hungary and Slovakia and Poland - already muster a considerable combined force of 259,000 troops.

NATO says these already show in practice the power of "interoperability", and that the extra forces being sent there are being integrated and embedded within these countries' national forces.

As such, most of these forces do not operate from a single base but in different detachments, operating in synergy with the home forces in different parts of the countries, using the existing base infrastructure there.